Last week the indexes were kind of quiet early on while everyone awaited the FED meeting on interest rates and monetary policy. Coming as no surprise, the FED raised interest rates, resulting in a slight decline by the end of the day. Overall, we had a rather flat performance across the indexes for the week.

All in all, not much progress was made, but there certainly was a lot of fluctuation.

Just when you think the geopolitical tensions might recede a bit, the President shakes things up. First, he attended the G7 summit, leaving abruptly and then followed by meetings with the North Korean President in what is termed as the "Trump-Kim Summit".

The mid-term indicator is demonstrating a weakening in the Foreign Equities market but a strengthening of the domestic markets. The StormGuard Algorithm is suggesting a strengthening in the overall market condition giving us reason to believe that although the geopolitical tensions have risen again, we are not seeing any evidence that we should be running for higher ground and bracing for impact.

Till we speak again, enjoy your HOT week!

Last week stocks showed mixed results as political headlines continued to dominate the news. The Dow lost 0.89% and the S&P 500 was almost flat with a 0.02% gain.[1] The NASDAQ, on the other hand, reached a record high on Thursday and ended the week up 1.32%.[2] Both the S&P 500 and NASDAQ experienced their 4th week of gains in a row.[3]International stocks in the MSCI EAFE lost ground, posting a 0.52% decline.[4]

Two Key Perspectives From Last Week
1. Trade tension continued. Spats with U.S. allies - including Canada - and ongoing threats of a trade war with China captured investors' attention last week. On Friday, equities briefly stumbled when the U.S. pledged new tariffs on Chinese goods, and China responded by promising the same level of tariffs on the U.S.[5] A true trade war could slow global economic growth, but the current tariff tension may be little more than negotiation tactics.[6]
2. Interest rates increased. On Wednesday, June 13, the Federal Reserve raised its benchmark interest rates for the 2nd time this year. Fed Chairman Powell said, "...the economy is doing very well. Most people who want to find jobs are finding them and unemployment and inflation are low."[7] The Fed believes economic growth will continue at a faster rate than they last predicted. They also project that unemployment will fall to 3.6% by the end of 2018. The Fed may raise rates twice more this year.[8]
The TakeawayGetting caught up in the news cycles and international headlines is easy, but they often provide little perspective on what may actually lie ahead for investors. Instead of trying to predict market performance, we encourage you to focus on the data.
This week, we'll gain new perspectives on the housing market, as well as employment. The insight will continue to help us build a picture of where the economy is today-and how to help our clients make the most of their opportunities. 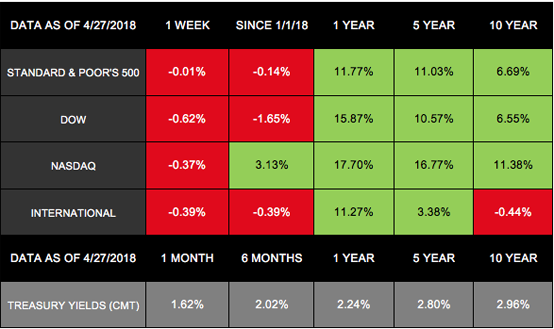 Notes: All index returns (except S&P 500) exclude reinvested dividends, and the 5-year and 10-year returns are annualized. The total returns for the S&P 500 assume reinvestment of dividends on the last day of the month. This may account for differences between the index returns published on Morningstar.com and the index returns published elsewhere. International performance is represented by the MSCI EAFE Index. Past performance is no guarantee of future results. Indices are unmanaged and cannot be invested into directly.

Check the background of this firm/advisor on FINRA’s BrokerCheck.
Call Us   Visit Us
Free Portfolio Risk Analysis

First, we meet you where you are and find out where you’d like to go on your journey.

Next, we find out what you need to take up the mountain with you—before planning your bucket list of wants and wishes.

Then, we form a strategic plan.

This is where your feet hit the path and all of our careful planning pays off as your plan is put into action.

Phase 5 – Keeping Your Plan Effective into the Future

We will continue to guide your steps and keep your plan effective and efficient as you approach your financial summit!